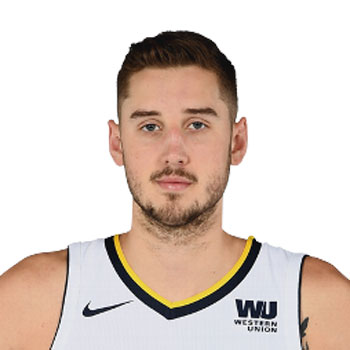 He attended New Hampton School in New Hampton, New Hampshire. Following a high school, he played college basketball for Syracuse Orange, where averaged 10.1 points, 6.3 rebounds and 1.8 blocks per game. Soon after his sophomore year, he was selected for the NBA draft.

Recruited to play for Utah Jazz with the 24th pick in the first round in 2017 NBA draft, he was traded to the Denver Nuggets shortly after being selected. On October 23, 2017, he was assigned to the Rio Grande Valley Vipers of the NBA G League, before being called by Nuggets on November 8th. Tyler Lydon has a net worth of $1.8 million, and his base salary is $1.7 million in 2018. Lydon total contract worth is $3 million with Denver Nuggets. Hudson, New York-based Forward contract consists of 2 years, i.e., from the year 2017 to 2019. After tax deductions and agent commission, we estimated Tyler net income is around $0.9 million per year.

According to some sources, he is single and conscious about his career. Although there are no reports claiming him being indulged in any romantic relationships, there are a few picture him with girls on his Instagram that is, to some extent, suggestive of him being a ladies-man. He also shares a picture of his dog on his Instagram account.

Tyler Lydon represented United States at the FIBA Americas Under-18 Championship and FIBA Under-19 World Cup.

His acrobatic ability has made him one of the rising names in the world of NBA. He is far away from any kind of rumor or controversy.