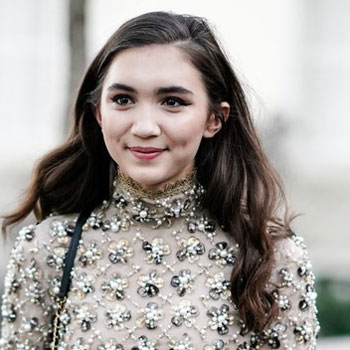 ...
Who is Rowan Blanchard

Rowan Blanchard is an American actress most known for her role on Disney series Girl Meets World. She also played Jackie Geary in "The Goldbergs."

She was born the eldest child of yoga instructors Elizabeth and Mark Blanchard-Boulbol. She grew up along with her younger sister, Carmen and younger brother, Shane. She was involved in the acting field at the age of five while made her appearance in the film The Back-Up Plan at seven.

Her name was chosen by a character in The Witching Hour. She is an activist and often raises her voice in areas like feminism, human rights, and gun violence. As a part of a feminist campaign #TeamHeForShe, she spoke at the UN Women and US National Committee's annual conference. Blanchard earns a decent amount of money from her career. Her current net worth is estimated to be $3 million. Besides acting, she is involved in writing and has released a book, "Still Here."

She is young, beautiful and yet to be romantically linked with anyone. Even though, she is seen hanging out with many of the guy friends, her dating one out of them has not been officially stated till the date. In 2016 she reported via Twitter, she was open to liking any gender.

She is yet to win any award, however, has been nominated for several ones such as Young Artist Awards, Teen Choice Award, and Kids Choice Awards. Her incredible work has garnered her a huge number of fans and followers from all over the world.

She was caught up in the rumor of dating her co-stars including Teo Halm, Corey Fogelmanis, Peyton Meyer and Uriah Shelton.