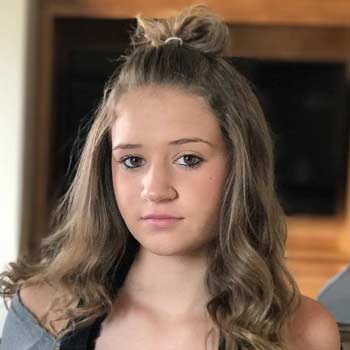 Youtuber and Musical.ly star, Riley Lewis has massive of followers on her social media under the name rileylewisofficial. As of 2018, she has over 455K followers on her musical.ly, more than 205k followers on Instagram, and over 172k subscribers on her YouTube channel.

She was born in Arizona and raised in California. Her father is in a construction business, and her mother designs dress. She is the oldest of her triplet; other two are Madison Lewis and Dakota Lewis.

Her career started as a musical.ly star and as of 2018 has accumulated more than 450,000 fans. She uploaded her first musical.ly video “Roses” by The Chainsmokers, which has over 37.3k likes till the date. On June 4, 2017, Lewis joined YouTube, creating a self-titled channel and in a year span, it has more than 172k subscribers. Some of her most viewed videos on YouTube are, Chapstick Challenge, Chicken Girls, This or That, Who know me better and Snapchats. She has an average earning of $6.7K - $106.7K annually from her YouTube channel. She has a staggering net worth of $0.4 million.

Riley Lewis currently dating Musical.ly star and YouTuber, Tyler Phillips. The couple started seeing with each other since 2015 and shares a perfect relationship. They were very public about their relationship. The couple often posted pictures of each other on their Instagram account, and also made a YouTube channel together, 'Riley and Tyler.' Her sister Madison Lewis is also a musical sensation who has over 2.7 millions fans on musical.ly.

As a YouTuber and Musical.ly sensation, she might have won numerous awards but more than that, she has massive of admirers and followers from around the world.

Any kind of rumor or controversey has not affected her professional as well as personal life.

YouTuber, YouNower, and Twitch live streamer known online as diegosaurs. His most followed video platform is YouNow with more than 470,000 fans.

Keith Santagato is an American web star and social media star who is better known for having massive number of followers in his Vine account. His constellation is Gemini.

One of the popular and handsome youtube star from America.He rose to fame after posting videos Pirates vs Ninjas and How to be a model.

An internet personality and a YouTube star, Mariya Harris is popular in the internet for being the original member of the popular all-girl gaming channel WatchGirlsPlay.