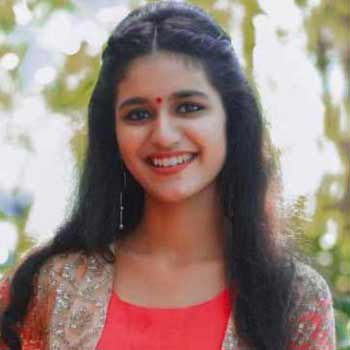 ...
Who is Priya Prakash

She was born and raised in Thrissur district of Kerala to Preetha and Prakash Varrier. She is currently pursuing her bachelor's degree at ICA college from Thrissur. She is a trained in classical dance, Mohiniyattam.

The viral machine, Priya Prakash Varrier is a trained classical dancer. To date, she participated in a various beauty pageant. In 2018, she appeared in a Tamil music video, 'Nee Vaanam Naan Mazhai.' Recently, she featured in the advertisement of Nestle Munch which has over 5.8 million views on YouTube. She weaved a dream to work with the actors like Shah Rukh Khan, Vijay, Dhanush, and Suriya.

She is not very open about her affair and relationship. Though, there is no any info available about her boyfriend and dating history. Outside of acting and modeling, she loves to watch movies, and her favorite actors are Ranveer Singh, Shah Rukh Khan, and Vijay Sethupathi. She likes to watch cricket, and her favorite cricket star is Mahendra Singh Dhoni. She charges 15-20 lakh per movie. However, her net worth is unknown yet.

She wins Outlook's Magazine Social Media Award on April 21, 2017. Currently, she has more than 5.7 million followers on her Instagram.

She was rumored to be having an affair with Hrishikesh Saji.

Indian film actress, who has appeared in Tamil, Kannada and Telugu films. Shaheen Khan is known for Bend It Like Beckham (2002), Sweet Destiny (2004) and You Will Meet a Tall Dark Stranger (2010).

Best known for her porcelain skin, Elizabeth Gillies is an actress who is also gifted with a loving voice. She is also a talented singer.