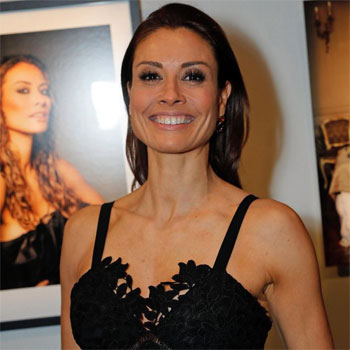 ...
Who is Melanie Sykes

Grew up with the passion of acting and modeling, She appeared in Boddingtons beer ads in the mid-1990s and modeled for Berlei lingerie.

She has her own line of underwear and lingerie with high street chain and retailer Debenhams. In addition, she has been the popular face of Head & Shoulders shampoo in Britain, appearing in print and television advertising and the high street chain Matalan. Moreover, she also appeared in ads of Morrisons, Wynsors World of Shoes and Churchill Insurance. Through her television and modeling career, she has maintained a pretty amount of bank balance. She has an estimated net worth of $5 million.

She married Daniel Caltagirone in January 2001.The duo has two sons, Roman (born 2002) and Valentino Luca (born 21 July 2004). In July 2008, it was reported that the couple split up and finally they divorced in June 2009. She later married her boyfriend Jack Cockings on 18 May 2013 at Sherborne Castle in Dorset. However, they separated in 2016. Outside of her acting career, she also proves herself as an author. In 2006, she published the Blooming Beautiful: My Plan for Looking Great, Being Healthy and Surviving Hormonal Havoc, Throughout Pregnancy and as a New Mum, co-written with Hilary Boyd and published by Michael Joseph.

As a television, radio presenter and model, she won numerous awards and rewards but more than she has massive of fans and followers.

In November 2013, she was arrested and warned by police over an assault against Cockings