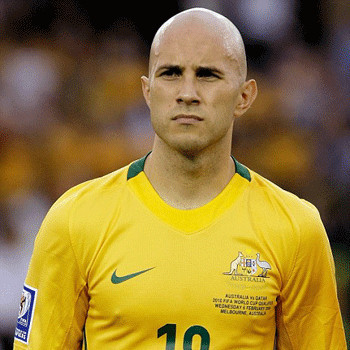 ...
Who is Mark Bresciano

He was born to an Italian father and a Croatian mother. He started playing football locally and then later in 1995, moved to the first team of Victorian Premier League side Whittlesea Zebras, when he was 15 years old.

At the age of 19 he played senior club football in Italy. He earns wage of 500,000 € from his current playing club Al- Gharafa . He can play very well as a forward and in the central or right mid field as well.

In May 2006, he married his childhood love Renée Capitanio in Heidelberg,Victoria,Melbourne. This couple has 2 daughters, Alessia born in Feb 2007 and Montana born in May 2009.

In 1997 FIFA U-17 World Championship qualifying campaign, he featured conspicuously in the Australian national team scoring five goals. He is also included in Australia’s 15 best Soccer players of all time.

Mark has been dragged to a great controversy after FIFA bans for his transfer to Qatari club Al-Gharafa.