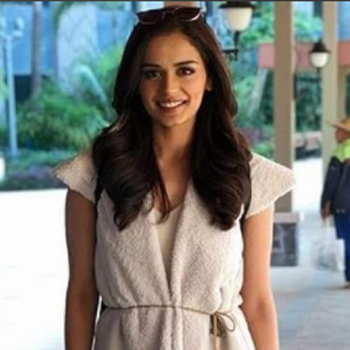 ...
Who is Manushi Chhillar

She belongs to the Jat family. Her father, Dr. Mitra Basu Chhillar works as a scientist at the Defence Research and Development Organisation, while her mother, Dr. Neelam Chhillar, serves as an associate professor and department head of neurochemistry at the Institute of Human Behaviour and Allied Sciences. She received her early education from St. Thomas School in New Delhi and later joined BPS Women's Government Medical College to pursue her medical degree.

She has not shared much more info about her private life.She is currently single and does not seem to be engaged in an affair. She has hobbies of dancing, traveling, listening music and writing poetry. Narendra Modi is her favorite politician and Shah Rukh Khan and Priyanka are her favorite movie stars.

Previously, she was crowned with Femina Miss India 2017 on 25 June 2017. At Miss World 2017, she was the semifinalist in the Top Model, People's Choice, and Multimedia competitions.

She is far away from rumor and controversy.