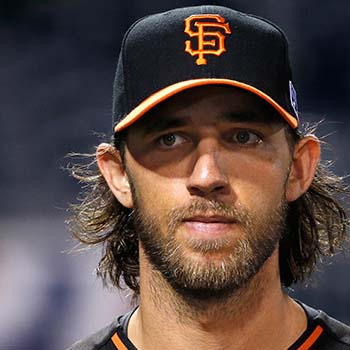 ...
Who is Madison Bumgarner

Born in Hickory, North Carolina, Madison grew up in a log house that his father, Kevin, built, sleeping in a loft at nights. He was already playing in a youth baseball league by the age of four.

One of the most dominant postseason runners in MLB history in 2014, earning World Series MVP honors while leading the San Francisco Giants to a 7-game victory over the Kansas City Royals. He was named the Most Valuable Player of the 2014 World Series

In high school, Bumgarner dated a girl also named Madison Bumgarner. Bumgarner married Ali Saunders on February 14, 2010. Bumgarner is a smokeless tobacco user since he was in 5th grade.