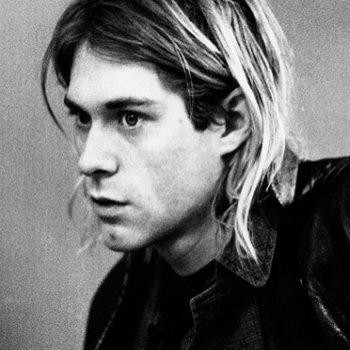 Kurt Donald Cobain ( born February 20, 1967 – died April 5, 1994) was an American musician. He was well known as the lead singer, guitarist, and primary songwriter of the rock band Nirvana.

Cobain was born at Grays Harbor Hospital in Aberdeen, Washington, United States of America. He was from Irish, English, Scottish, and German ancestry. He was encouraged by his grandmother, who was also professional artist herself.

Cobain used to appear with his unclean hair and unshaven appearance. He was also famous for his raw agonizing voice. He used to wear a ripped Jeans.

Cobain had a long relationship with Courtney Love They finally married on 24 February 1992. They were having a romantic love life as they gave birth to one child but the relation ended with the unfortunate death of Cobain.

His song, "Smells Like Teen Spirit", was honored by Rolling Stone Magazine and MTV as the 3rd best pop song out of 100 of all time. He was named 12th greatest guitar player of all-time by Rolling Stone magazine in 2003.

It was claimed that he suffered chronic stomach pain from stomach ulcers and back pain from scoliosis. He was also noted to to take a suicide attempt.