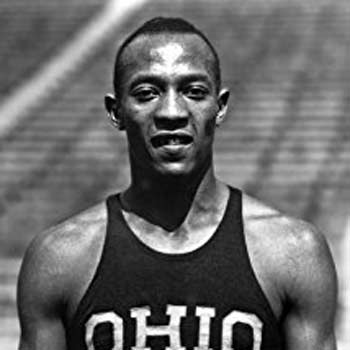 Grew up with the passion for outdoor sports, his athletic career started in high school, where he won three track and field events at the 1933 National Interscholastic Championships. He later competed at Ohio State University and equaled one world record and broke three others before qualifying and competing in the 1936 Olympics.

Started at the age of 32, he smoked up to pack of cigarette in a day for 35 years. In 1979, he was hospitalized on and off with an extremely aggressive and drug-resistant type of lung cancer. He died at the age of 66 and buried at Oak Woods Cemetery in Chicago.

Jesse Owens married nearly 45 years to Ruth Owens. The couple wedded in 1935. The couple had three daughters together, Gloria, Beverly, and Marlene. His wife Owens died of heart attack in 2001. His wife was the chairwoman of Jesse Owens Foundation, an organization devoted to supporting the development of young people. Currently, the organization is run by her daughters.

He won numerous awards and honors, AP Athlete of the Year, Alabama Sports Hall of Fame (Inducted), Likewise USA Track and Field created the Jesse Owens Award in 1981, which is given annually to the country's top track and field athlete.Furthermore, in 2001 Ohio State University devoted Jesse Owens Memorial Stadium for track and field events.

He had to suffer at the hands of white racists in his own country.