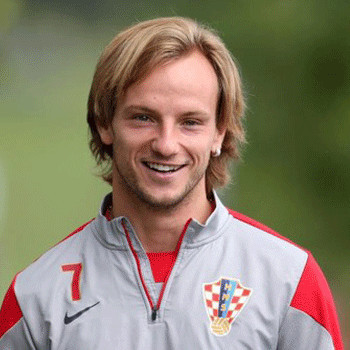 He was born to a Croatian family in Mohlin, Switzerland as his parents emigrated to Switzerland before the war in Croatia and spent his childhood and in Switzerland. He started his career at a local club FC Mölhin-Riburg.

He started his professional career at the age of 14 from Football Club Basel. After playing for two years in Sevilla, he was made the captain of the club. Basically, he is known for his passing range as well as scoring goals from midfield.

Rakitic married his Spanish girlfriend Raquel Mauri in April 2013 in Seville, Spain. They were dating each other for two years and then finally got bonded. They also have a daughter named Althea who was born in July 2013.

He was nominated the best young player of the 2006-07 Super League season and also received the Swiss ‘Goal of the Year’ award. He has represented the country at UEFA EURO 2008 and UEFA EURO 2012.

At Europa League final, Rakitic kissed Daniel Carrico after Sevilla won over Benfica, which has dragged him to a great controversy.