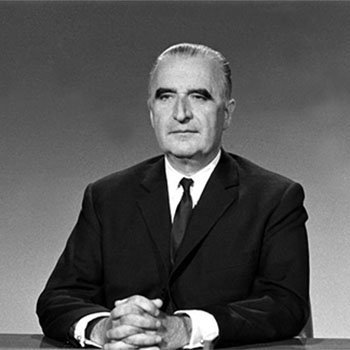 ...
Who is Georges Pompidou

Pompidou was born in the commune of Montboudif, in the department of Cantal in central France as Georges Jean Raymond Pompidou. He graduated from the École Normale Supérieure with a degree in literature.

After France's liberation, Pompidou met General Charles de Gaulle in 1944, and was selected to be his adviser on economics and education. He also worked on the constitution for France's new Fifth Republic.

In 1935, Pompidou married Claude Jacqueline Cahour, who was studying law in Paris. Their daughter was born with Down's Syndrome; Alain, their foster son was born in 1942.

Georges Pompidou is remembered as a chief architect of the most successful republic France had known, a man who successfully presided over the transition from a charismatic leader to one who had to rely on more normal mechanisms.