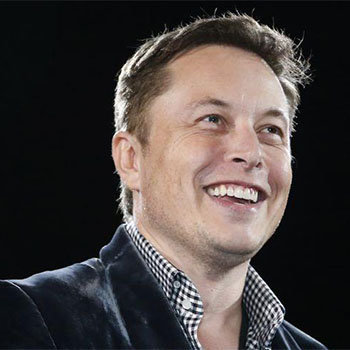 Elon Musk is a famous business magnate, engineer and inventor who founded PayPal, SpaceX, and Tesla Motors. He is also co-founder and chairman of SolarCity, co-chairman of OpenAI and co-founder of Zip2.

Musk was born in Transvaal, South Africa. He graduated from Pretoria Boys High School and moved to Canada in June 1989. In 1995, at age 24, Musk moved to California to begin a PhD and in 2002, he became a U.S. citizen.

His goals include reducing global warming through sustainable energy production and consumption, and reducing the "risk of human extinction" by "making life multiplanetary" by setting up a human colony on Mars. As of June 2016, he has an estimated net worth of US$12.7 billion, making him the 83rd wealthiest person in the world.

In 2014, Musk was awarded the World Technology Award. In 2012, Musk was awarded with the Royal Aeronautical Society's highest award: a Gold Medal. He has received tons of other awards and honors which is not possible to include here.

An American businesswoman, entrepreneur and CEO known for being the founder of the blood-testing company Theranos which she founded in 2003 and is currently under federal criminal investigation.

American Internet Entrepreneur, Evan Spiegel is the co-founder and CEO of the American multinational technology and social media company Snap Inc., which he created (as Snapchat Inc.) alongside with Bobby Murphy and Reggie Brown while they were the students at Stanford University.