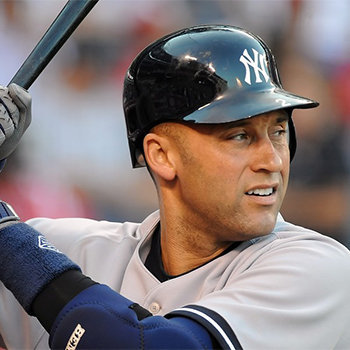 Derek Jeter net worth is estimated as $185 million. He started his own philanthropic institute “Turn 2 Foundation” in the year 1996 which extends aid to teenagers & children to stay away from drug addiction & alcoholism.

Jeter's personal life has been a frequent topic in gossip columns and celebrity magazines since 1996. He was in relationship with singer Mariah Carey from 1997 to 1998. He has also dated model Vida Guerra, former Miss Universe Lara Dutta, singer Joy Enriquez, television personality Vanessa Minnillo, and the actresses Jordana Brewster, Jessica Biel and Minka Kelly. He has been dating Hannah Davis since 2012 and engaged since October 2015.

In his legendary career, Jeter has won numerous awards and earned many accomplishments. He has won 14 All-Star selections, five Gold Glove Awards, five Silver Slugger Awards, two Hank Aaron Awards, and a Roberto Clemente Award and many more. In 2015, Jeter was inducted into the New Jersey Hall of Fame.