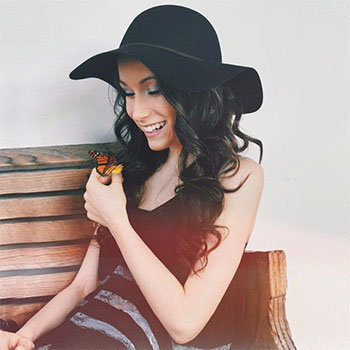 Clarissa May is an American actress and multi-talented personality known for her online beauty and dance tutorials as well as modeling, blogging, vlogging and acting.

Clarissa May was born on June 23, 1999 in California, United States. She began dancing in 2005 at the age of four. Her mom put her in first ballet class because she wouldn’t stop pirouetting around the house.

Clarissa May lives with her parents and younger sister Audrey. She has a dog named Brady. She became severely brain damaged at the age of 10, which caused life-threatening Anorexia Nervosa at age 12.

Clarissa May at Move dance competition 2015, performing Gamzatti Variation from La Bayadere was placed 1st in the Senior pointe division with a MOVE award (the highest award possible).

Best known for being one of the little member of the family vlog  OKbaby. His father Oscar Morales and mother Kyra Sivertson are the creator of the channel.

Vidya Iyer well known by her stage name Vidya Vox is an Indian born Singer and Youtuber. Her music has a mix of Western pop, electronic dance music, Bollywood hits, and Indian classical music. She started her YouTube channel in April 2015.

JeromeASF is a YouTube personality and is the co founder of the YouTube channel AwesomeSauceFilms. He frequently posts Minecraft let's plays, and minigames.