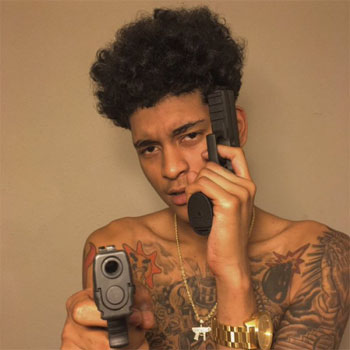 Trill Sammy is a famous and talented rapper and singer from America. He rose to fame after releasing the song Trappin. He is also known for creating short rap videos posted on YouTube.

Sammy was born and raised in Houston,Texas. He is American by nationality whereas is of African and Puerto Rican ethnicity. He relied more on his mother who was quite surprised when she first heard about the success of her son.

Trill began his career in his school days. He grabbed the wide range of attention when his video that was posted on Vine and Twitter in 2015 got viral. Thereafter he has released several songs including Sorry 4 The Sleep, Go, Just watch and Uber Everywhere. Besides that, he has collaborated with singers like Dice Soho and released Just Watch and Really Matter. No wonder, he holds the staggering net worth of $300,000.

Information regarding his personal life is not disclosed yet. Seems like he is focused in career making and enjoying his bachelor life.

Sammy has accomplished a lot throughout his career. He has numerous fan followings and boast about 1 million followers in his Instagram account trillsammy.

He is yet to be caught up in any kind of rumors and controversies until now.

Keith Murray (born September 13, 1974) is an American rapper. He is well known in the world as a member of the hip hop trio Def Squad, which includes fellow rappers Redman and Erick Sermon.