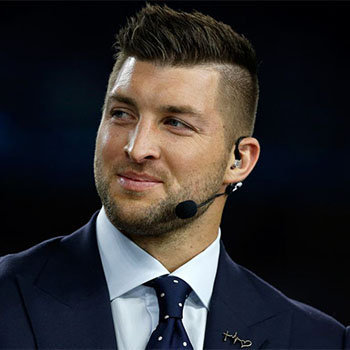 The birthplace of Tim is Manila, Philippines. He is the youngest of five children. He and his siblings were all homeschooled by their parents, who instilled the family's Christian beliefs.

In 2007, he became the first sophomore to win the Heisman Trophy while playing at the University of Florida. His kneeling stance, which he used to pray to the Christian God, became a registered trademark in October, 2012.

In 2013 Tebow was designated a Great Floridian by Florida Governor Rick Scott in recognition of his “major contributions to the progress and welfare" of Florida.

His mother had dysentery and went into a coma while she was pregnant with Tim, but she refused to abort.