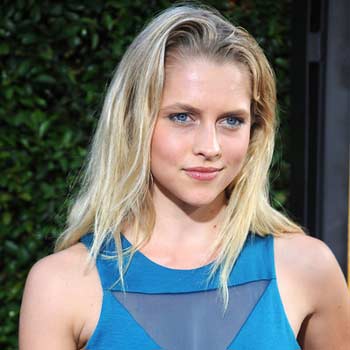 ...
Who is Teresa Palmer

She went to acting classes for a couple of years and appeared in a few television commercials. She later worked as an attendant at Hungry Jack's in Rundle Mall in 2005. In 2004, The Filmmaker Murali K. Thalluri in the independent Australian film 2:37.

To date, she acted in several highest grossing movie which includes Bedtime Stories, The Sorcerer's Apprentice, Warm Bodies, and Lights Out. She also starred in the short film Bear, directed by Nash Edgerton, which competed at the 2011 Cannes Film Festival. Outside of acting and singing, she is the philanthropist and co-founded a sister site to Your Zen Life called Your Zen Mama, with her friend, actress Sarah Wright. This blue-eyed girl has a perfect measurement 34-24-35 inch, and her hair color is blonde. She is enjoying the net worth of $3 million as per the reports of Celebrity Net Worth.

She started seeing with the actor & director Mark Webber in 2012. They engaged in August 2013 and married on 21 December 2013 in Mexico. They together have two children, Bodhi Rain Palmer, born in February 2014 and Forest Sage Palmer, born in December 2016. She is also a stepmother of Webber's son from his previous relationship with actress Frankie Shaw. Currently, the family lives in Beachwood Canyon community of Los Angeles. Previously, she was in an affair with a movie actor, Russell Brand in 2008. Aside from his current husband and Brand, she also dated Scott Speedman, Adam Brody, Topher Grace, and Stuart Dew. Palmer and her friend Phoebe Tonkin launched the health and wellness website 'Your Zen Life.'

Currently, she is not undergoing with any rumor or controversy.