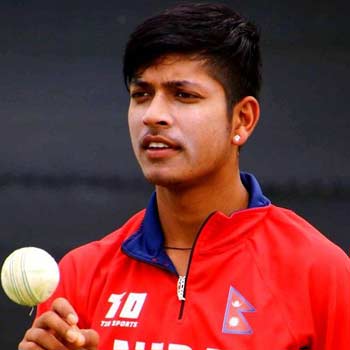 ...
Who is Sandeep Lamichhane

Nepal coach Pubudu Dassanayake discovered Sandeep Lamichhane at the age of 14 during a pit stop in the remote Chitwan Province on the way from Kathmandu to left-arm spinner Basant Regmi's wedding, Sandeep Lamichhane has continued to make the most of good fortune at every opportunity to come his way.

Sandeep Lamichane rose to prominence with outstanding bowling at the 2016 U-19 World Cup where he guided Nepal to a creditable eighth place. He came into the light by becoming the second highest wicket-taker in the tournament with 14 scalps in six innings at an average of 17 and an economy of 4.67. He also became the highest wicket-taker in ICC U-19 Cricket World Cup in Bangladesh. In 2018, he was the first Nepalese player who selected in the Carribean Premier League. He is one of the less economical bowlers of the IPL 2018. He bowls with an economy rate of 5.75 in two matches. His excellent performance in IPL 2018 added him to the ICC World XI squad for the May 31 T20 against West Indies at the Lord’s cricket ground. Sandeep Lamichane had tied up with Lamichhane got tied up with Sanima Bank which situated in Nepal, Kathmandu as his sponsor for two years and the bank had been providing the Indian Premier League (IPL)-bound Nepali cricketer with Rs 20,000 since July 2016. The two-year deal will run out in July, this year. He was one of the most demanding players of Everest Premier League (EPL) sold for Rs 175,000 each for the city-based Twenty20 cricket tournament on October 2017. Furthermore, he also receives a monthly salary around 35,000 from the CAN and gets the same amount from the ICC as grade A player. His IPL career ended with scalping 5 wickets for 82 runs in 12 overs playing 3 matches. He was even named one of the best young talents in the tournament and was also one of the best IPL debutants. He brought down the batting stars like Suresh Reina, Surya Kumar Yadav, Keiron Pollard, Parthiv Patel, and Krunal Pandya.

Sandeep Lamichhane has not opened his mouth when it comes to his private life. He has not talked to the media about his affair, girlfriend, relationship, and dating history. His father Chander Narayan Lamichhane worked as an employee in the Indian Railway. He is the younger of his siblings, Indu and Mohan Lamichhane. Sachin Tendulkar and Shane Warne are his cricket idols. Aside from his professional career, he loves traveling and listening to music.

Sandeep Lamichhane ICC World Cricket League Division Two Player of the tournament. He also earned the nominations of NSJF Pulsar Sports Award 2074. Most recently in the Indian Premier League, he was awarded as the stylish player of the match while playing against Chennai Super Kings on May 18, 2018. He received INR 1,00,000 as the prize money.

So far now, Sandeep Lamichhane has not been the part of any rumor and controversy.