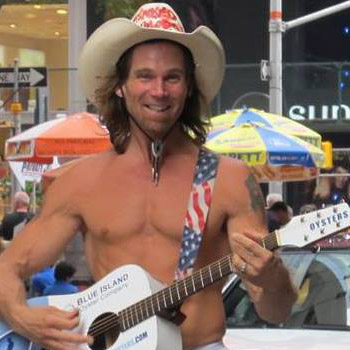 Robert John Burck, popularly known as the Naked Cowboy, is an American street performer, actor, singer, songwriter, writer, former political candidate. His pitch is on New York City's Times Square who only wears cowboy boots, a hat, and briefs, with a guitar technically placed to give the prefect illusion of nudity.

He attended Our Lady of the Rosary elementary school and later nailed a bachelor's degree in political science from the University of Cincinnati. He started busking and first appeared on Venice Beach, Los Angeles. He is better known as a fixture of Times Square in New York City and he performed at a Leinster Rugby game.

Burck has a net worth of $4million. He has got his own theme song named "I'm the Naked Cowboy". After getting sponsorship from Fruit of the Loom, he switched from usual briefs to boxer briefs. He challenged Michael Bloomberg and president Barack Obama for 2009 election for Mayor of New York City and 2012 presidential election respectively.

Burck married Patricia Cruz. She is from Mexico City. While marrying him she was just aged 25. Cruz is a professional belly dancer. She is also a group fitness instructor. How ever both husband and wife posses same get up, and she is also the official Naked Cowgirl. They don't have any child till now.

However he is not successful to get awards and achievements till now.