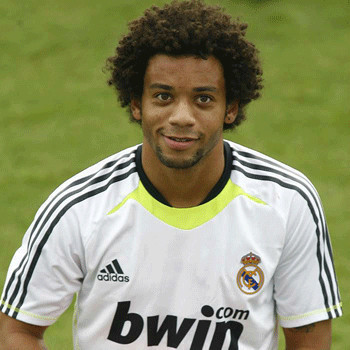 ...
Who is Marcelo Vieira

Marcelo was born in Rio de Janeiro, Brazil. He even considered quitting football to work instead in order to help his family because of his family poor background but Fluminese regarding his talent in football made sure that he carried on playing.

He tattooed his grandfather on his arm San Pedro who used to pay the money so he could keep playing football back in Brazil. According to him if it wasn't for his grandfather he would have never played football.

He is married to his longtime girlfriend Clarisse Alves introduced by her brother when they were only 15 years old. He has a son named Enzo Gattuso Alves Vieira born on 24 September 2009.

He was named in the 55 player shortlist for the FIFA World XI for achievements. He is considered as "Best left back in the world" and he is also named as third best player in the League after Cristiano Ronaldo and Messi