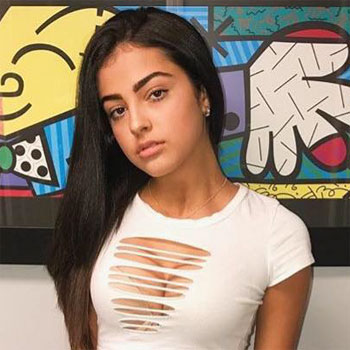 Malu Trevejo rose to fame after uploading her daily lifestyle in her Instagram account named 'malutrevejoo 123'. She later also established herself in musical.ly. She sang a song named "Luna Llena".

Malu Trevejo was born on October 15, 2002. She is of Latin descent and her birth sign is Libra. Currently, she resides with her mother in South Florida. She has a sister who is also her best friend.

Till now she has accumulated over 4.8m followers on her Instagram account. Through her successful career, she has made a pretty amount of bank balance. Her net worth is unknown yet.

Malu Trevejo is too young to think about marriage. She is unmarried yet. Currently, she is dating her boyfriend. On April 2, 2017, she also uploaded a video of kissing her boyfriend on her official YouTube channel.

As of now, any kind of drastic rumors has not affected her personal as well as professional life.

Lui Calibre is a YouTube phenomenon who runs the popular YourHeroes channel. He primarily posts Grand Theft Auto gameplay and is well known for pranking and trolling other players.

Popular and talented youtube star and internet personality from France who is rose to fame after posting videos 9 Boring Tips While You’re on the Computer.