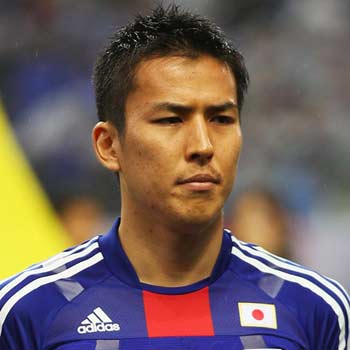 ...
Who is Makoto Hasebe

To date, Makoto Hasebe scored 19 goals in 398 apps. On July 1, 2014, he agreed to a two-year contract with German sports club, Eintracht Frankfurt. Prior, he played for 1. FC Nürnberg, from 2013 to 2014. He has maintained a pretty amount of bank balance from his earnings. As per some online sources, his net worth is around $3 million. His estimated annual salary is $ 211,871. Hasebe first senior appearance for Japan in a friendly match against the United States on February 11th, 2006, at AT&T Park in San Francisco. In his 108 appearances for his nation, he scored two international goals. He is going to lead the Japan national team in the 2018 FIFA World Cup, Russia.

Makoto Hasebe tied the knot with Japanese model and weathercaster, Arisa Sato on 9th July 2016. His wife also appeared in several TV dramas and films too. The couple celebrated their wedding ceremony in the presence of some close friends and relatives. It is reported the couple started dating in August 2013.

One of the members of the gold medal winning United States women's gymnastics team, Dominique Moceanu is a former gymnast. She is also a writer.