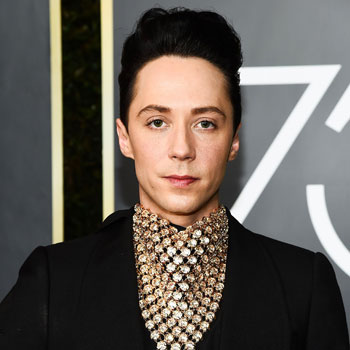 He is the son of Pattie Wier and John Weir. He has a brother Brain Weir who is four-year youngers to him. He was 11 years old when he learned to skate. He won World Junior Championships in 2001.

Off the ice, he appeared in television and documentary series, including he was also the host of the own reality TV series, "Be Good Johnny Weir." He is also a fashion designer and designed costumes for some famous ice dancers, Melissa Gregory, Denis Petukhov and Oksana Baiul. In 2011, he was the famous face of M.A.C.’s 2011 holiday line titled “Glitter and Ice." He has made millions of dollar through his earnings summing up the total net worth of $4 million.

Johnny Weir is a gay and was previously married to Victor Voronov. The couple sustains their relationship only for four years. They separated in 2015. Prior, he dated American singer, Adam Lambert for a short period. Currently, he is single and does not engage in an affair. He is the philanthropist and associated with several charitable institutions, Traver Rains, Delaware Valley Legacy Fund, nPlay. His autobiography "Welcome to My World" published in 2011.

He won Readers Choice Skater of the Year in 2008. Likewise, he was also honored by “Visibility Award” from the Human Rights Campaign in 2010. That same year, he won the NewNowNext Award for ‘Most Addictive Reality Star’ for the documentary films Be Good Johnny Weir and Pop Star On Ice. For his contribution towards the society, the Delaware Valley Legacy Fund honored him as a "2013 National Hero."

In 2010 Winter Olympics, the two Canadian broadcasters were homophobic about his performance and making derogatory comments about his sexual and presentation.