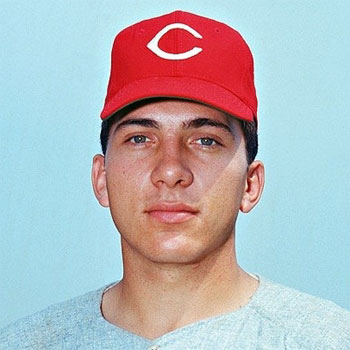 Grew up with the passion for outdoor sports, he went to Binger High School and was a two-sport star and valedictorian of his class.

During 17 seasons of career with Reds, he leads the team to four National League pennants and two World Series victories. He batted right-handed and led the National League in runs batted in three times and twice in home runs.

He is currently married to Lauren Baiocchi. The couple reputedly got married in 2004 and had been leading a happy relationship ever since. He was previously married to Laura Cwikowski (1987-1995) and Vickie Chesser (1975-76). He has three sons, Joshua, Bobby, and Justin. In 2008, Bench co-authored the book Catch Every Ball: How to Handle Life's Pitches with Paul Daugherty, published by Orange Frazer Press. Outside of his professional career, he also served as the host of television series The Baseball Bunch from 1982 to 1985

As, he is one of the greatest catchers in the baseball history of his time. Greater Wichita Area Sports Commission started to present an award after his name, "Johnny Bench Award."

Being an outstanding player, he is not involved in any rumor or controversy.