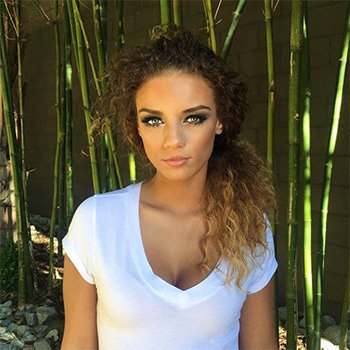 Young and sexy actress and television personality from America.She became popular internet sensation after performing as a model on Jacob Latimore’s song.

Born and grew up in Union Beach,New Jersey along with her one sister.She completed graduation from North Carolina Central University.

Frumes is regarded as the prettiest woman.She has served at numerous social media sites/ She also featured on TV show Wild N Out. Followed by that she has made her appearance in music videos such as A Yeah and movie drama, Mango Guava.

Such a beautiful model dated American football player Antonio Brown previously. They eventually broke up after a month of being together. She was also linked with American actor Nick Cannon before that. No offence she will hook up or get marry in future.

Jena holds an estimated net worth of $250,000. She has accumulated huge fans as well as followers throughout her career/ She boasts about 3.4 million Instagram followers.

She faced some controversies during her time with her ex-boyfriend Antonio.

Beauty and fashion guru, PiinkSparkles is an internet personality and YouTuber from United States. She is well known for her YouTube channel PiinkSparkles.

ThatKiddKuda is an American YouTube entertainer who produces short films and entertaining content through video games such as NBA 2K. He has more than 210,000 YouTube subscribers.

YouTube star otherwise known as JasMeannnn who gained popularity posting vlogs, tags, and beauty tutorials to more than 480,000 subscribers. She was also a winner of the 2015 Wet Seal Model Search.