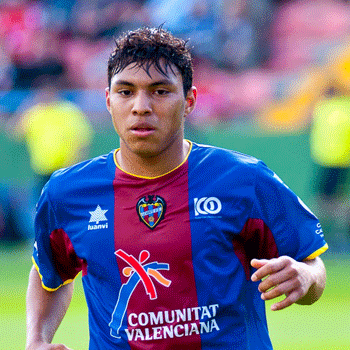 ...
Who is Jefferson Montero

He was the son of Pedro Montero and Mercedes Vite born at Babahoyo, Ecuador. His parents had a banana farm. His youth career began from the club Emelec and from there he made his professional debut as well.

His current market value is 3.3 million Euros. Since 2007, he is playing from the Ecuador national team as a midfielder. He has appeared in 38 cap matches from the team making 8 prominent goals for the team.

He is a married man. He has been married to his long term girlfriend Sonia Alvarado in 2012. This couple seems to have a pretty good coordination among each-other and are happily married. Yet they don't have any children.

He first played from the national team in an August 2007 with a friendly match against Bolivia. On 27 May 2009 he first scored for his national team against the match with El Salvador.

Arsenal and West Ham these days are spotting the star player Montero to sign a contract for upcoming seasons.