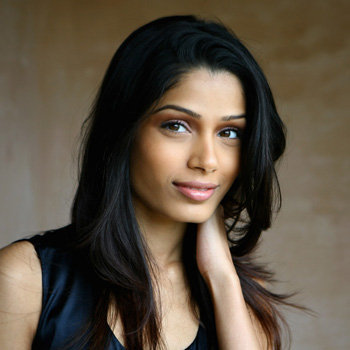 Indian actress who starred as Latika in Slumdog Millionaire. She also appeared in You Will Meet a Tall Dark Stranger, Day of the Falcon, and Immortals.

She anchored an international travel show before getting her big acting break.Her mother Sylvia Pinto was the principal of St. John's Universal School in Goregaon, Mumbai, and her father Frederick Pinto was a senior branch manager for the Bank of Baroda. Her elder sister, Sharon, works for NDTV.

After she appeared in Slumdog Millionaire, she was featured in People Magazine's Most Beautiful People List.In 2007, Pinto's modelling agency selected her and six other models to audition for the female lead in Danny Boyle's film Slumdog Millionaire (2008) after a request by its casting director.

She dated co-star Dev Patel from 2009 to 2014. She then began dating polo player Ronnie Bacardi in 2015.She starred in Rise of the Planet of the Apes with James Franco.