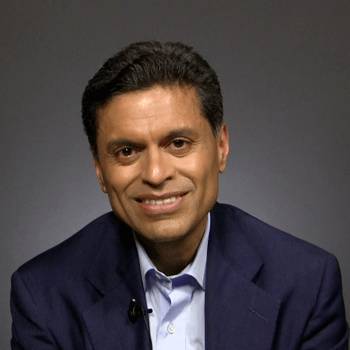 ...
Who is Fareed Zakaria

A talented and charming Indian-born American journalist and author who is also a columnist for Newsweek.He is also a host of CNN's Fareed Zakaria GPS.

He was born in Mumbai, India in a Muslim family as a son of Rafiq Zakaria (Father) and Fatima Zakaria (Mother).He attended the Cathedral and John Connon School and also graduated from Yale University in Bachelor of Arts.

He is also a doctor of philosophy in Government.He is a author of three international bestsellers book.He has a net worth of 4 million dollar.

Regarding to his personal life, he is a married man.His beautiful wife name is Paula Throckmorton Zakaria who is the jewelry designer.This couple has got one son named Omar and two daughter named Lila and Sofia.

He was nominated for National Magazine Award for five times and won it once.His shows also won Peabody Award not only that also nominated for various Emmys.He also won Padma Bhushan award for his contribution in field of journalism.

There was allegation of improper Attribution on him.