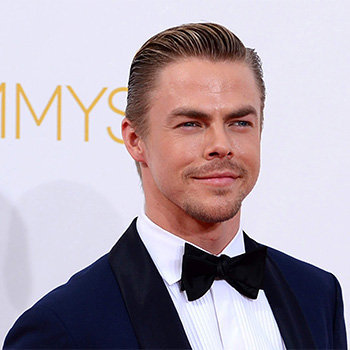 Born in Sandy, Utah to Marianne and Bruce Hough, Derek went to London to live and study with dance coaches Corky and Shirley Ballas when he was 12 where he stayed for ten years. He and his sister were tutored there by the Ballases and schooled at the Italia Conti Academy of Theatre Arts.

His sister is actress Julianne Hough. Derek Hough is the only professional dancer to win six Mirror Ball Trophies. He has won Macy's Stars of Dance: Design-a-Dance four out of eight times.

Derek Hough is the only person that has won 2 Emmy Awards and 7 nominations for Outstanding Choreography. He earned a world championship title in U-21 Latin American Dance competition. He has also won World Choreography Awards for Television Live Performance along with several other awards and honors.

Shannon Elizabeth admitted that her relationship with Derek was entirely fake for purposes of votes for the show Dancing with Stars. There have been persistent rumors that Derek might actually be gay since he was found in a Lake City gay bar.

Alexus Oladi is a cute girl. She is an avid dancer and is known for being a member of Abby Lee Dance Company mini team.