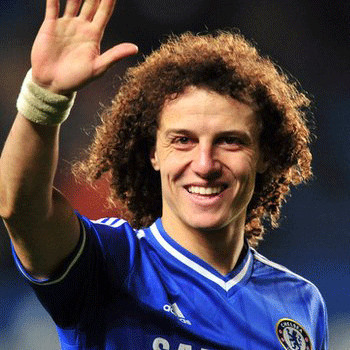 He was born Diadema, Brazil and spent his childhood there. He is a devout christian. David began his club career from Esporte Clube Vitoria at the tender age of 14.

David is referred to as The Simpson's character Sideshow Bob. He was trabnsferred from Chelsea to Paris Saint-Germain(Present club) in June 2014 for 50 million pound which is a world record transfer for a defender.

He began dating Sara Madiera, a Portuguese Dentist, in 2010. They are currently engaged. David is 27 years . The couple don't have any kids but there certainly are rumors about Sara being pregnant.

This player was the named the Primeira Liga Player of the Year in 2009, Premier League Player of the month in March 2011 and Fifa World Cup dream Team in 2014. He has also won many matches for his club and national team.

There have been rumors about David's transfer to another club, which till date is fallacious. There are also rumors that David's girrlfriend is pregnant after a slight bulge was seen while they were out in public.