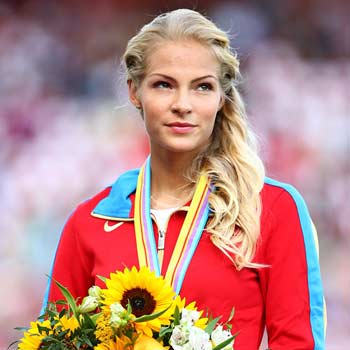 Born in Tver, Russian SFSR, she started playing volleyball at an early age of eight. Her father is a former athlete. She changed her interest from volleyball to long jump when she was thirteen.

She competed for ASKA Moscow. Even after IAAF suspended the Russian national federation, she was granted special permission to compete in 2016 Rio Olympics. As an athlete, she earns a whopping amount of money from her career. Her current estimated net worth is $3 million.

She is seen hanging out with her guy friends but with no confirmation about her being involved in a serious relationship, she is possibly single and is more occupied in her professional life.

She is rumored to be dating the hockey star, Evgeni Malkin. They were even spotted at the Russian national Athletics Championship stands. However, they have not made their relationship official.