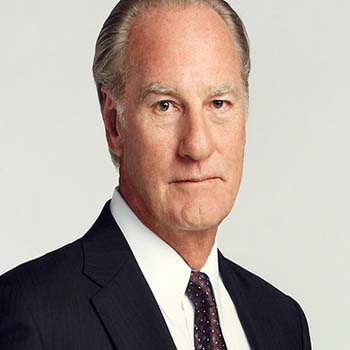 Craig Nelson was born in Spokane, Washington, the son of Vera Margaret (née Spindler), a dancer, and Armand Gilbert Nelson, a businessman. He attended Central Washington University studying criminology. He dropped out and went to Yakima Valley Community College to study English literature, but he dropped out again. He received a drama scholarship in the University of Arizona.

Craig T. Nelson is an American actor who has a net worth of $20 million dollars. Nelson began his entertainment career as a comedian. He was an early member of The Groundlings comedy troupe. Nelson is a motorsports fan and an avid racer.

Craig Nelson has been married to Doria Cook-Nelson since 1987. He was previously married to Robin McCarthy with whom he has three children named Tiffany, Chris and Noah.

Craig has won Primetime Emmy Award for Coach in 1992, Visual Effects Society Awards for The Incredibles in 2005, Lifetime Achievement Award in 2010 at Ojai Film Festival and Prism Award for Parenthood in 2012. He has been nominated in many categories.

Lee Allen Tergesen is an American actor popularly known as Lee Tergesen . He is best known for his work on the HBO prison drama, Oz and for playing Evan Wright in Generation Kill.