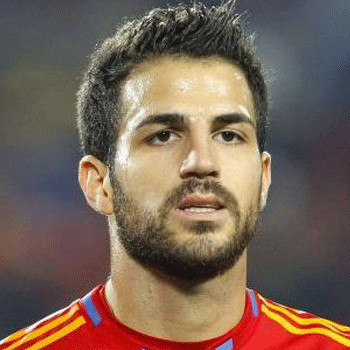 ...
Who is Cesc Fabregas

He was born in Arenys de Mar. His father name is Francesc Fàbregas, Sr. and his mother name is Núria Soler. He was the supporter of FC Barcelona since his childhood days. He played with CE Mataró starting his career.

His full name is Francesc "Cesc" Fàbregas Soler. He belongs to white ethnic background. His face is white. He have dark brown eyes and his hair color is dark brown. He weighs 75 kg. His zodiac sign is Taurus.

He is a married man. He got married to his beautiful wife Daniella Semaan. The couple is blessed with a beautiful daughter named Lia. She was born on 10 April 2013.

Cesc have won FIFA U-17 World Championship Golden Ball and Golden Shoe in 2003. In 2006 he won Bravo Award and Golden Boy Award. In 2007-8 season he won PFA Young Player of the Year. He also won Prince of Asturias Awards in 2010.

He was rumored to get back to Arsenal.