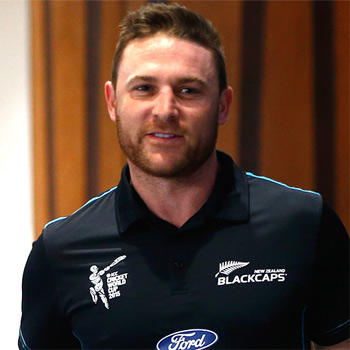 ...
Who is Brendon McCullum

He made his international ODI debut against Australia at Sydney, on Jan 17, 2002. He later made his first appearance in a test series against South Africa at Hamilton on March 10, 2004.

He was the first New Zealander who scores a triple hundred in a Test, 302 runs against India on 18 February 2014. Also, he is the second highest individual score in all Twenty20 cricket format (158 not out for the Kolkata Knight Riders the team against the Royal Challengers Bangalore in 2008). He has earned a significant portion of wealth as a cricketer. He is receiving an annual salary of $2 million. He has an estimated net worth of $10 million. Besides he is also fond of luxury cars. The cricketer has an extensive collection of Mercedez Benz, Range Rover, and Audi A1.

Married to his longterm girlfriend Ellissa McCullum since 2003, he has three children Riley McCullum, Maya McCullum, and one more. His younger brother Nathan McCullum is also a former cricketer of NewZealand. Beyond cricket, he involved in setting up CricHQ with the company's CEO Simon Baker and former New Zealand cricketer Stephen Fleming. He is the closest friend of Bollywood Actor, Siddharth Malhotra.

He bagged the New Zealand Sportsman Of The Year award in 2014, and then the sports New Zealand Leadership Award in 2016. Also, In the 2015 Queen's Birthday Honours McCullum was appointed an Officer of the New Zealand Order of Merit for services to cricket.

He is away from criticism in the media. Currently, he is not the part of any rumor or controversy.