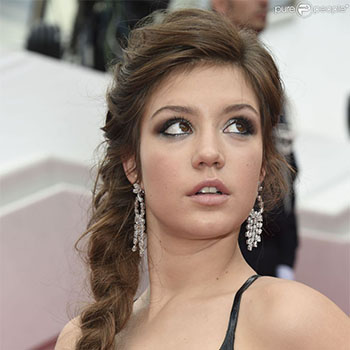 ...
Who is Adèle Exarchopoulos

22 year old talented and beautiful french actress, who got worldwide recognition after her phenomenal performance in the movie Blue Is the Warmest Colour. She belongs to the Greek roots.

Born in 19th arrondissement of Paris, as a daughter of Didier Exarchopoulos,a guitar teacher and Nurse,mother Marina Niquet. She joined the acting classes at the age of 9.

Exarchopoulos is the youngest artist ever who has received Palme d'Or. Even in real life she is close to her co-actress Lea Seydoux. She was sent to acting classes to get rid of her shyness nature.

She had been hooked up with the actor Jeremie Laheurte. It's still unknown whether the two are separated or still dating. She was into relationship with Sean Penn. Seems like she is single now.

She has 38 nominations, eventually wining Trophée Chopard Award in Cannes Film Festival 2014. She has also awarded with Palme d'Or.

Singer and songwriter, Lennon Stella is better known portraying the role "Maddie" alongside with her real-life sister Maisy Stella, who plays Daphne Conrad, in the CMT musical drama series Nashville. Before acting, the duo sister already gained national attention when her and Maisy's cover of Robyn's "Call your Girlfriend" went viral overnight.